The MVC design architecture have long existed in software engineering. This design patterns spans across almost all the languages, with little or no difference. But in this tutorial, we will be discussing only about MVC as regards ASP.NET

models are data and business logics.

View: Views are the components that display the application's user interface (UI). Views sometimes may have to display the model data to the user, as seen in an edit scenario.

views are the application's UI

Controller: Controllers are the drivers that handle user interaction, work with the model, and ultimately determines the view to be shown. In an MVC application, the view only displays information to the user; the controller handles and responds to user requests and interaction. For instance, the controller handles query-string values, and transfers these values to the model, which could be used for database queries.

The following figure illustrates the interaction between Model, View and Controller. 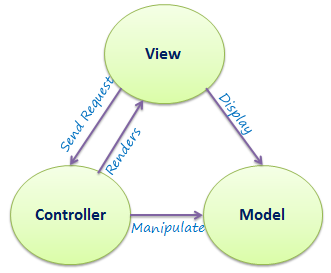 The following figure illustrates the flow of the user's request in ASP.NET MVC.