Python: Find out what the epoch is on a given platform

The epoch is the point where the time starts, and is platform dependent. For Unix, the epoch is January 1, 1970, 00:00:00 (UTC). Write a Python program to find out what the epoch is on a given platform. Also convert a given time in seconds since the epoch. 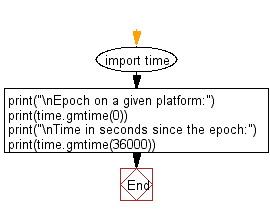