All computer programs consist of two elements: code and data. Furthermore, a program can be conceptually organized around its code or around its data. The first way is called process-oriented model. Procedural languages such as C employ this model to considerable success. To manage increasing complexity the second approach called object-oriented programming was conceived. An object-oriented program can be characterized as data controlling access to the code. Java is object-oriented programming language. Java classes consist of variables and methods (also known as instance members). Java variables are two types either primitive types or reference types. First, let us discuss how to declare a class, variables and methods then we will discuss access modifiers. 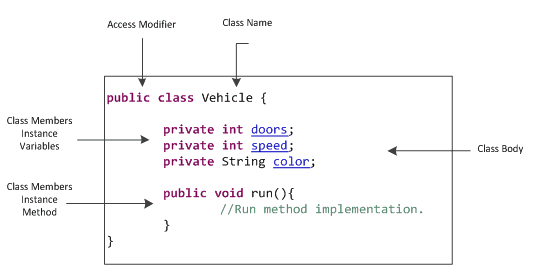 Variables defined within a class are called instance variables because each instance of the class (that is, each object of the class) contains its own copy of these variables. Thus, the data for one object is separate and unique from the data for another. An instance variable can be declared public or private or default (no modifier). When we do not want our variable’s value to be changed out-side our class we should declare them private. public variables can be accessed and changed from outside of the class. We will have more information in OOP concept tutorial. The syntax is shown below.

A method is a program module that contains a series of statements that carry out a task. To execute a method, you invoke or call it from another method; the calling method makes a method call, which invokes the called method. Any class can contain an unlimited number of methods, and each method can be called an unlimited number of times. The syntax to declare method is given below.

Each object has members (members can be variable and methods) which can be declared to have specific access. Java has 4 access level and 3 access modifiers. Access levels are listed below in the least to most restrictive order.

public: Members (variables, methods, and constructors) declared public (least restrictive) within a public class are visible to any class in the Java program, whether these classes are in the same package or in another package. Below screen shot shows eclipse view of public class with public members.

Default (no value):The default access level is declared by not writing any access modifier at all. Any class, field, method or constructor that has no declared access modifier is accessible only by classes in the same package.

private: The private (most restrictive) modifiers can be used for members but cannot be used for classes and Interfaces. Fields, methods or constructors declared private are strictly controlled, which means they cannot be accessed by anywhere outside the enclosing class. 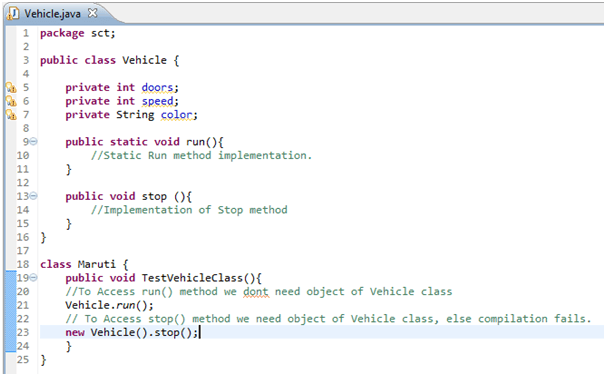 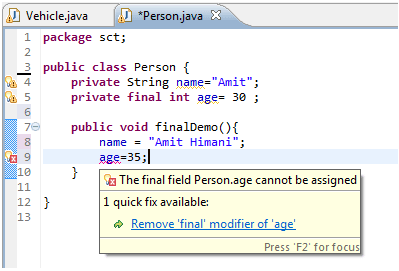 abstract: There are situations in which you will want to define a superclass that declares the structure of a given abstraction without providing a complete implementation of every method. This modifier is applicable to class and methods only. We will discuss abstract class in detail in separate Tutorial.