Garbage collection relieves programmers from the burden of freeing allocated memory. Knowing when to explicitly free allocated memory can be very tricky. Giving this job to the JVM has several advantages.

A garbage collector is responsible for

Garbage-Collection Roots — The Source of All Object Trees

There are four kinds of GC roots in Java: 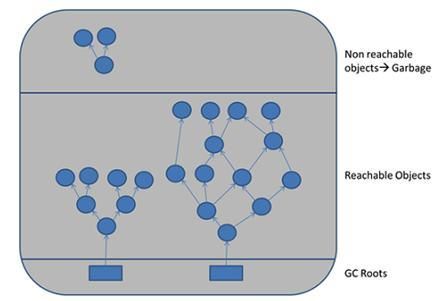 Java objects are created in Heap and Heap is divided into three parts or generations for sake of garbage collection in Java, these are called as Young generation, Tenured or Old Generation and Perm Area of the heap.

In a typical application, most objects are very short-lived. On the other hand, some objects last for a very long time and even until the application is terminated. When using generational garbage collection, the heap area is divided into two areas—a young generation and an old generation—that are garbage-collected via separate strategies. Objects are usually created in the young area. Once an object has survived a couple of GC cycles it is tenured to the old generation.

New Generation is further divided into three parts known as Eden space, Survivor 1 and Survivor 2 space. When an object first created in heap its gets created in new generation inside Eden space and after subsequent Minor Garbage collection if object survives its gets moved to

survivor 1 and then Survivor 2 before Major Garbage collection moved that object to Old or tenured generation.

Permanent generation of Heap or Perm Area of Heap is somewhat special and it is used to store Metadata related to classes and method in JVM, it also hosts String pool provided by JVM. 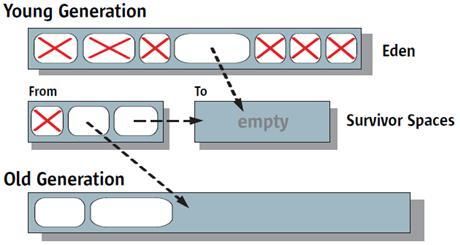 An Example of garbage collection and memory management using Java code. In below code, we are checking memory size before the creation of an array of 10000 string, after the creation of it, after initialization and after de-allocation of all objects. Memory utilization is printed after each stage.

Java Code:Go to the editor

(your output may very as per JVM and OS version)