A for loop is a special loop that is used when a definite number of loop iterations is required. Although a while loop can also be used to meet this requirement, the for loop provides you with a shorthand notation for this type of loop. When you use a for loop, you can indicate the starting value for the loop control variable, the test condition that controls loop entry, and the expression that alters the loop control variable—all in one convenient place. Below is the syntax of a conventional for loop.

Eventually, when the counter is not less than 11 (after 1 through 10 have printed), the for loop ends and the program continues with any statements that follow the for loop.

Let’s see below example which prints all the values divisible by 7 in the range of 1 to 100 in reverse order.

Here, type specifies the type and itr-var specifies the name of an iteration variable that will receive the elements from a collection, one at a time, from beginning to end. Because the iteration variable receives values from the collection, the type must be the same as (or compatible with) the elements stored in the collection. Thus, when iterating over arrays, the type must be compatible with the base type of the array.

Below example shows the use of enhanced for loop. 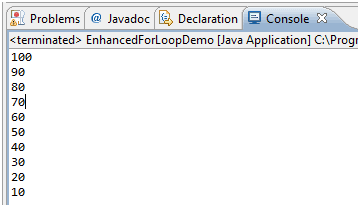 As this output shows, the enhanced for loop style automatically cycles through an array in sequence from the lowest index to the highest.

Previous: While and Do loop
Next: Java Branching Statements