While Loops in Java

In computer programming, a loop is a sequence of instruction s that is continually repeated until a certain condition is reached. Imagine you have to write a program which performs a repetitive task such as printing 1 to 100. Writing 100 print statements would not be wise thing to do. Loops are specifically designed to perform repetitive tasks with one set of code. Loops save a lot of time. A loop is a structure that allows repeated execution of a block of statements. Within a looping structure, a Boolean expression is evaluated. If it is true, a block of statements called the loop body executes and the Boolean expression is evaluated again. As long as the expression is true, the statements in the loop body continue to execute. When the Boolean evaluation is false, the loop ends. 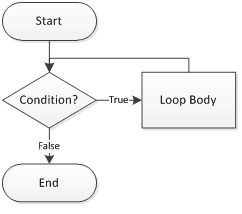 In Java there are three types of loops:

The while loop is good for scenarios where you don't know how many times a block or statement should repeat, but you want to continue looping as long as some condition is true. A while statement looks like below. In Java, a while loop consists of the keyword while followed by a Boolean expression within parentheses, followed by the body of the loop, which can be a single statement or a block of statements surrounded by curly braces. 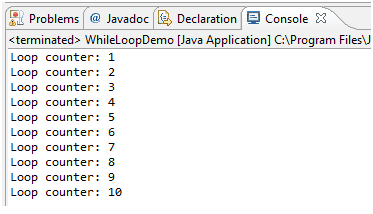 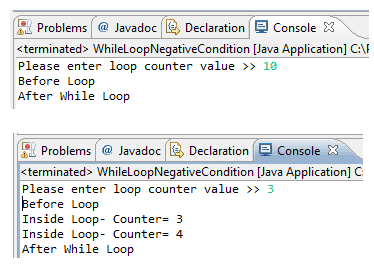 The do loop is similar to the while loop, except that the expression is not evaluated until after the do loop's code is executed. Therefore the code in a do loop is guaranteed to execute at least once. The following shows a do loop syntax:

Previous: Switch Satement
Next: For loop