Not everything in Java is an object. There is a special group of data types (also known as primitive types) that will be used quite often in programming. For performance reasons, the designers of the Java language decided to include these primitive types. Java determines the size of each primitive type. These sizes do not change from one operating system to another. This is one of the key features of the language that makes Java so portable. Java defines eight primitive types of data: byte, short, int, long, char, float, double, and boolean. The primitive types are also commonly referred to as simple types which can be put in four groups

Let’s discuss each in details:

The smallest integer type is byte. It has a minimum value of -128 and a maximum value of 127 (inclusive). The byte data type can be useful for saving memory in large arrays, where the memory savings actually matters. Byte variables are declared by use of the byte keyword. For example, the following declares and initialize byte variables called b:

The short data type is a 16-bit signed two's complement integer. It has a minimum value of -32,768 and a maximum value of 32,767 (inclusive). As with byte, the same guidelines apply: you can use a short to save memory in large arrays, in situations where the memory savings actually matters. Following example declares and initialize short variable called s:

The most commonly used integer type is int. It is a signed 32-bit type that has a range from –2,147,483,648 to 2,147,483,647. In addition to other uses, variables of type int are commonly employed to control loops and to index arrays. This data type will most likely be large enough for the numbers your program will use, but if you need a wider range of values, use long instead.

Floating-point numbers, also known as real numbers, are used when evaluating expressions that require fractional precision. For example interest rate calculation or calculating square root. The float data type is a single-precision 32-bit IEEE 754 floating point. As with the recommendations for byte and short, use a float (instead of double) if you need to save memory in large arrays of floating point numbers. The type float specifies a single-precision value that uses 32 bits of storage. Single precision is faster on some processors and takes half as much space as double precision. The declaration and initialization syntax for float variables given below, please note “f” after value initialization.

Double precision, as denoted by the double keyword, uses 64 bits to store a value. Double precision is actually faster than single precision on some modern processors that have been optimized for high-speed mathematical calculations. All transcendental math functions, such as sin( ), cos( ), and sqrt( ), return double values. The declaration and initialization syntax for double variables given below, please note “d” after value initialization.

The boolean data type has only two possible values: true and false. Use this data type for simple flags that track true/false conditions. This is the type returned by all relational operators, as in the case of a < b. boolean is also the type required by the conditional expressions that govern the control statements such as if or while.

Primitive Variables can be of two types

It's not mandatory to initialize Class level (instance) variable. If we do not initialize instance variable compiler will assign default value to it. Generally speaking, this default will be zero or null, depending on the data type. Relying on such default values, however, is generally considered bad coding practice.The following chart summarizes the default values for the above data types.

Java class PrimitiveDemo as below:

Output of above PrimitiveDemo class as below: 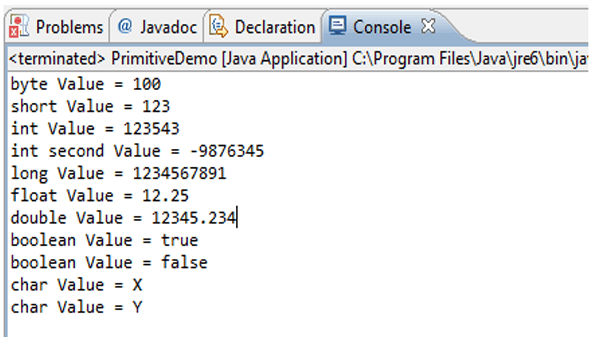