The formal definition of a thread is, A thread is a basic processing unit to which an operating system allocates processor time, and more than one thread can be executing code inside a process. A thread is sometimes called a lightweight process or an execution context

Imagine an online ticket reservation application with a lot of complex capabilities. One of its functions is "search for train/flight tickets from source and destination" another is "check for prices and availability," and a third time-consuming operation is "ticket booking for multiple clients at a time".

In a single-threaded runtime environment, these actions execute one after another. The next action can happen only when the previous one is finished. If a ticket booking takes 10 mins, then other users have to wait for their search operation or book operation. This kind of application will result into waste of time and clients. To avoid this kind of problems java provides multithreading features where multiple operations can take place simultaneously and faster response can be achieved for better user experience. Multithreading enables you to write very efficient programs that make maximum use of the CPU, because idle time can be kept to a minimum.

In the most general sense, you create a thread by instantiating an object of type Thread.

Java defines two ways in which this can be accomplished:

Inside run( ), you will define the code that constitutes the new thread. It is important to understand that run( ) can call other methods, use other classes, and declare variables, just like the main thread can. The only difference is that run( ) establishes the entry point for another, concurrent thread of execution within your program. This thread will end when run( ) returns.

The limitation with this approach (besides being a poor design choice in most cases) is that if you extend Thread, you can't extend anything else. And it's not as if you really need that inherited Thread class behavior because in order to use a thread you'll need to instantiate one anyway.

Remember, every thread of execution begins as an instance of class Thread. Regardless of whether your run() method is in a Thread subclass or a Runnable implementation class, you still need a Thread object to do the work.

If you have approach two (extending Thread class): Instantiation would be simple

If you implement Runnable, instantiation is only slightly less simple.

To instantiate your Runnable class:

Giving the same target to multiple threads means that several threads of execution will be running the very same job (and that the same job will be done multiple times).

Default constructor – To create thread with default name and priority

This constructor will createa thread from the runnable object.

This constructor will create a thread with the name as per argument passed.

So now we've made a Thread instance, and it knows which run() method to call. But nothing is happening yet. At this point, all we've got is a plain old Java object of type Thread. It is not yet a thread of execution. To get an actual thread—a new call stack—we still have to start the thread.

You've created a Thread object and it knows its target (either the passed-inRunnable or itself if you extended class Thread). Now it's time to get the whole thread thing happening—to launch a new call stack. It's so simple it hardly deserves its own subheading:

Prior to calling start() on a Thread instance, the thread is said to be in the new state. There are various thread states which we will cover in next tutorial.

The following example demonstrates what we've covered so far—defining, instantiating, and starting a thread: In below Java program we are not implementing thread communication or synchronization, because of that output may depend on operating system’s scheduling mechanism and JDK version.

We are creating two threads t1 and t2 of MyRunnable class object. Starting both threads, each thread is printing thread name in the loop. 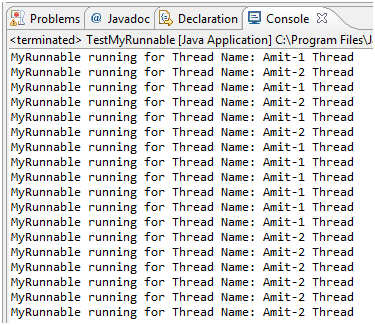