Java is an object oriented programming language. The exception is object created at the time of exceptional/error condition which will be thrown from the program and halt normal execution of the program. Java exceptions object hierarchy is as below: 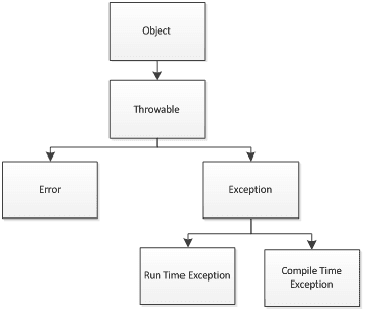 All exception types are subclasses of the built-in class Throwable. Thus, Throwable is at the top of the exception class hierarchy. Immediately below Throwable are two subclasses that partition exceptions into two distinct branches. One branch is headed by Exception. This classic used for exceptional conditions that user programs should catch. This is also the class that you will subclass to create your own custom exception types. There is an important subclass of Exception, called RuntimeException. Exceptions of this type are automatically defined for the programs that you write and include things such as division by zero and invalid array indexing.

The other branch is topped by Error, which defines exceptions that are not expected to be caught under normal circumstances by your program. Exceptions of type Error are used by the Java runtime system to indicate errors having to do with the runtime environment,itself. Stack overflow is an example of such an error. This chapter will not be dealing with exceptions of type Error, because these are typically created in response to catastrophic failures that cannot usually be handled by your program.

Java’s exceptions can be categorized into two types:

A checked exception is an exception which the Java source code must deal with, either by catching it or declaring it to be thrown. Checked exceptions are generally caused by faults outside of the code itself - missing resources, networking errors, and problems with threads come to mind. These could include subclasses of FileNotFoundException, UnknownHostException, etc.

Below example program of reading, file shows how checked exception should be handled. Below image shows compile time error due to checked exception (FileNotFoundException and IO Exception) related to file operation. IDE suggests either we need to enclose our code inside try-catch block or we can use throws keyword in the method declaration.

We will update the method declaration with throws keyword and calling method (main method) will have to handle this exception. I will explain file reading part in detail in file I/O tutorial, here we will concentrate more on exception part. While running the program we can encounter two types of problems (1) File is missing or not present, which we are trying to read (2) User does not have read permission on file or file is locked by some other user. As we are expecting two different type of exceptions we have to catch both exceptions or we can have one catch block which is catching super-class Exception. Below code shows multiple catch block syntax.

Java Code:  Go to the editor

Output: If test.txt is not found:

Unchecked exceptions inherit from the Error class or the RuntimeException class. Many programmers feel that you should not handle these exceptions in your programs because they represent the type of errors from which programs cannot reasonably be expected to recover while the program is running.

When an unchecked exception is thrown, it is usually caused by a misuse of code - passing a null or otherwise incorrect argument.

We had seen sample program of runtime exception of divide by zero in last tutorial here we will see other program, which will take user age as input and grant access if age is more than 18 years. Here user input is expected in numeric form if user input is other alphabetic then our program will end in exception condition(InputMismatchException). This exception occurs at runtime. We can decide to handle it programmatically but it is not mandatory to handle. Runtime exceptions are good to handle using try-catch block and avoid error situation.