JavaScript: Get a random item from an array

Write a JavaScript function to get a random item from an array. 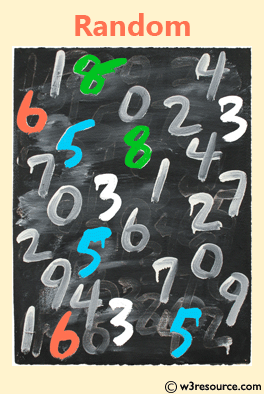 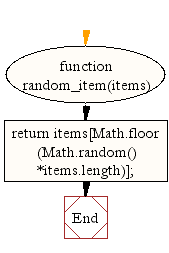 See the Pen JavaScript - Get a random item from an array - array-ex- 35 by w3resource (@w3resource) on CodePen.

What's the difference between using "let" and "var"?

But there's lots more to explore, read on...

JavaScript has powerful semantics for looping through arrays and array-like objects. I've split the answer into two parts: Options for genuine arrays, and options for things that are just array-like, such as the arguments object, other iterable objects (ES2015+), DOM collections, and so on.

Okay, let's look at our options:

1. Use forEach and related

In any vaguely-modern environment (so, not IE8) where you have access to the Array features added by ES5 (directly or using polyfills), you can use forEach (spec | MDN):

forEach accepts a callback function and, optionally, a value to use as this when calling that callback (not used above). The callback is called for each entry in the array, in order, skipping non-existent entries in sparse arrays. Although I only used one argument above, the callback is called with three: The value of each entry, the index of that entry, and a reference to the array you're iterating over (in case your function doesn't already have it handy).

Unless you're supporting obsolete browsers like IE8 (which NetApps shows at just over 4% market share as of this writing in September 2016), you can happily use forEach in a general-purpose web page without a shim. If you do need to support obsolete browsers, shimming/polyfilling forEach is easily done (search for "es5 shim" for several options).

forEach has the benefit that you don't have to declare indexing and value variables in the containing scope, as they're supplied as arguments to the iteration function, and so nicely scoped to just that iteration.

If you're worried about the runtime cost of making a function call for each array entry, don't be; details.

Additionally, forEach is the "loop through them all" function, but ES5 defined several other useful "work your way through the array and do things" functions, including:

Use a simple for loop

Sometimes the old ways are the best:

If the length of the array won't change during the loop, and it's in performance-sensitive code (unlikely), a slightly more complicated version grabbing the length up front might be a tiny bit faster:

But with modern JavaScript engines, it's rare you need to eke out that last bit of juice.

In ES2015 and higher, you can make your index and value variables local to the for loop:

And when you do that, not just value but also index is recreated for each loop iteration, meaning closures created in the loop body keep a reference to the index (and value) created for that specific iteration:

You'll get people telling you to use for-in, but that's not what for-in is for. for-in loops through the enumerable properties of an object, not the indexes of an array. The order is not guaranteed, not even in ES2015 (ES6). ES2015+ does define an order to object properties (via [[OwnPropertyKeys]], [[Enumerate]], and things that use them like Object.getOwnPropertyKeys), but it didn't define that for-in would follow that order; ES2020 did, though. (Details in this other answer.)

The only real use cases for for-in on an array are:

Looking only at that first example: You can use for-in to visit those sparse array elements if you use appropriate safeguards:

You wouldn't do that in inline code, of course. You'd write a utility function. Perhaps:

ES2015 added iterators to JavaScript. The easiest way to use iterators is the new for-of statement. It looks like this:

Under the covers, that gets an iterator from the array and loops through it, getting the values from it. This doesn't have the issue that using for-in has, because it uses an iterator defined by the object (the array), and arrays define that their iterators iterate through their entries (not their properties). Unlike for-in in ES5, the order in which the entries are visited is the numeric order of their indexes.

Sometimes, you might want to use an iterator explicitly. You can do that, too, although it's a lot clunkier than for-of. It looks like this:

The iterator is an object matching the Iterator definition in the specification. Its next method returns a new result object each time you call it. The result object has a property, done, telling us whether it's done, and a property value with the value for that iteration. (done is optional if it would be false, value is optional if it would be undefined.)

The meaning of value varies depending on the iterator; arrays support (at least) three functions that return iterators:

Aside from true arrays, there are also array-like objects that have a length property and properties with numeric names: NodeList instances, the arguments object, etc. How do we loop through their contents?

Use any of the options above for arrays

At least some, and possibly most or even all, of the array approaches above frequently apply equally well to array-like objects:

The various functions on Array.prototype are "intentionally generic" and can usually be used on array-like objects via Function#call or Function#apply. (See the Caveat for host-provided objects at the end of this answer, but it's a rare issue.)

Suppose you wanted to use forEach on a Node's childNodes property. You'd do this:

If you're going to do that a lot, you might want to grab a copy of the function reference into a variable for reuse, e.g.:

Obviously, a simple for loop applies to array-like objects.

for-in with the same safeguards as with an array should work with array-like objects as well; the caveat for host-provided objects on #1 above may apply.

for-of uses the iterator provided by the object (if any). That includes host-provided objects. For instance, the specification for the NodeList from querySelectorAll was updated to support iteration. The spec for the HTMLCollection from getElementsByTagName was not.

Other times, you may want to convert an array-like object into a true array. Doing that is surprisingly easy:

We can use the slice method of arrays, which like the other methods mentioned above is "intentionally generic" and so can be used with array-like objects, like this:

So for instance, if we want to convert a NodeList into a true array, we could do this:

It's also possible to use ES2015's spread syntax with JavaScript engines that support this feature. Like for-of, this uses the iterator provided by the object (see #4 in the previous section):

So for instance, if we want to convert a NodeList into a true array, with spread syntax this becomes quite succinct:

Array.from (spec) | (MDN) (ES2015+, but easily polyfilled) creates an array from an array-like object, optionally passing the entries through a mapping function first. So:

Or if you wanted to get an array of the tag names of the elements with a given class, you'd use the mapping function:

If you use Array.prototype functions with host-provided array-like objects (DOM lists and other things provided by the browser rather than the JavaScript engine), you need to be sure to test in your target environments to make sure the host-provided object behaves properly. Most do behave properly (now), but it's important to test. The reason is that most of the Array.prototype methods you're likely to want to use rely on the host-provided object giving an honest answer to the abstract [[HasProperty]] operation. As of this writing, browsers do a very good job of this, but the 5.1 spec did allow for the possibility a host-provided object may not be honest. It's in 8.6.2, several paragraphs below the big table near the beginning of that section), where it says:

Host objects may implement these internal methods in any manner unless specified otherwise; for example, one possibility is that [[Get]] and [[Put]] for a particular host object indeed fetch and store property values but [[HasProperty]] always generates false.

(I couldn't find the equivalent verbiage in the ES2015 spec, but it's bound to still be the case.) Again, as of this writing the common host-provided array-like objects in modern browsers [NodeList instances, for instance] do handle [[HasProperty]] correctly, but it's important to test.)