If you draw a straight line on a plane, the plane is divided into two regions. For example, if you pull two straight lines in parallel, you get three areas, and if you draw vertically one to the other you get 4 areas. 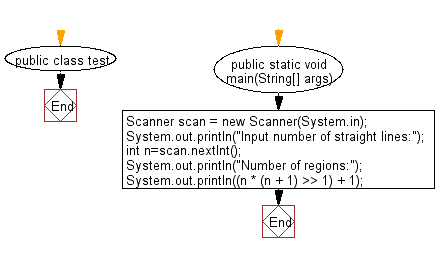 Previous: Write a Java program that accept a even number (n should be greater than or equal to 4 and less than or equal to 50,000, Goldbach number) from the user and create a combinations that express the given number as a sum of two prime numbers. Print the number of combinations.
Next: Write a Java program to test whether AB and CD are orthogonal or not.