JavaScript: Find the area of a triangle where lengths of the three of its sides are 5, 6, 7

Write a JavaScript function to find the area of a triangle where lengths of the three of its sides are 5, 6, 7. 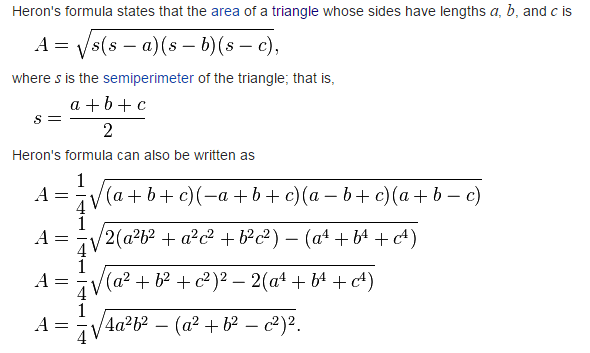 The Math.sqrt() function is used to get the square root of a number. If the value of the number is negative, Math.sqrt() returns NaN.

See the Pen JavaScript: Area of Triangle - basic-ex-4 by w3resource (@w3resource) on CodePen.

Previous: Write a JavaScript program to get the current date.
Next: Rotate the string 'w3resource' in right direction by periodically removing one letter from the end of the string and attaching it to the front.

With a promise, we basically say I want to execute this function, but I'll put it aside for now while it's running since this might take a while. Only when a certain value is resolved (or rejected), and when the call stack is empty, I want to use this value.
We can get this value with both .then and the await keyword in an async function. Although we can get a promise's value with both .then and await, they work a bit differently.
In the firstFunction, we (sort of) put the myPromise function aside while it was running, but continued running the other code, which is console.log('second') in this case. Then, the function resolved with the string I have resolved, which then got logged after it saw that the callstack was empty.
With the await keyword in secondFunction, we literally pause the execution of an async function until the value has been resolved before moving to the next line.
This means that it waited for the myPromise to resolve with the value I have resolved, and only once that happened, we moved to the next line: second got logged.