PHP Exercises : Delay the program execution for the specified number of seconds

Write a PHP script to delay the program execution for the given number of seconds.

int sleep ( int $seconds ): sleep() function is used to delay the program execution for the given number of seconds. 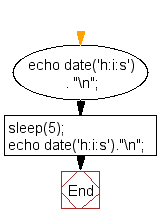