Note : Do not use phpinfo() function. 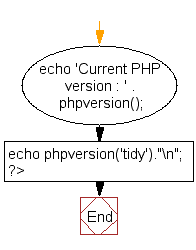 Beginning on June 28, 2011, the PHP Group implemented a timeline for the release of new versions of PHP. Under this system, at least one release should occur every month. More details: http://php.net/releases/