Python: Convert a given time in seconds since the epoch to a string representing local time

Write a Python program to convert a given time in seconds since the epoch to a string representing local time. 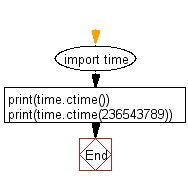