Write a Python program that takes a given number of seconds and pass since epoch as an argument. Print structure time in local time. 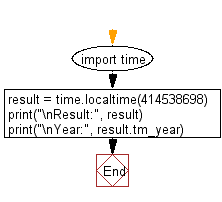