Python: Find the value of the first element in the given list that satisfies the provided testing function

Write a Python program to find the value of the first element in the given list that satisfies the provided testing function.

Use a list comprehension and next() to return the first element in lst for which fn returns True. 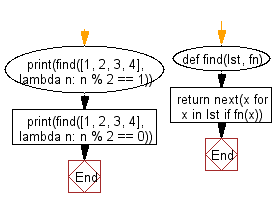