Python: Remove words from a string of length between 1 and a given number

Write a Python program to remove words from a string of length between 1 and a given number. 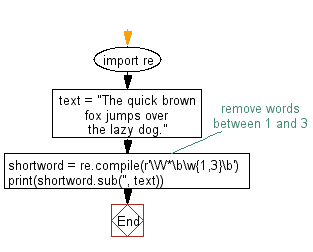 What are metaclasses in Python?

While in Python you can use arbitrary callables for metaclasses (like Jerub shows), the better approach is to make it an actual class itself. type is the usual metaclass in Python. type is itself a class, and it is its own type. You won't be able to recreate something like type purely in Python, but Python cheats a little. To create your own metaclass in Python you really just want to subclass type.

A metaclass is most commonly used as a class-factory. When you create an object by calling the class, Python creates a new class (when it executes the 'class' statement) by calling the metaclass. Combined with the normal __init__ and __new__ methods, metaclasses therefore allow you to do 'extra things' when creating a class, like registering the new class with some registry or replace the class with something else entirely.

However, metaclasses actually define the type of a class, not just a factory for it, so you can do much more with them. You can, for instance, define normal methods on the metaclass. These metaclass-methods are like classmethods in that they can be called on the class without an instance, but they are also not like classmethods in that they cannot be called on an instance of the class. type.__subclasses__() is an example of a method on the type metaclass. You can also define the normal 'magic' methods, like __add__, __iter__ and __getattr__, to implement or change how the class behaves.

Here's an aggregated example of the bits and pieces: