Goals of the RubyInstaller :

Binary packages for Windows: The binary packages for Windows found on ruby-lang.org lack several key components, such as OpenSSL, Zlib and Readline, which results in a broken experience for users trying install these binary distributions out-of-the-box. To compound the issue, other extensions are built-in, but lack essential bindings such as Tk and gdbm.

Install Ruby on Windows by RubyInstaller:

Clicking on the Download button following Web page will appear.

Version to Download : If you don’t know what version to install and you’re getting started with Ruby, you ca use Ruby 2.1.X installers. These provide a stable language and a extensive list of packages (gems) that are compatible and updated.
The 64-bit versions of Ruby are relatively new on the Windows area and not all the packages have been updated to be compatible with it. To use this version you will require some knowledge about compilers and solving dependency issues, which might be too complicated if you just want to play with the language.

Here are the steps to install Ruby on a Windows machine.

NOTE: You may have different version available at the time of installation. 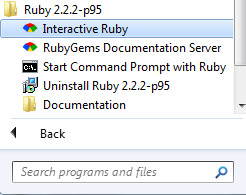