Write a Python program to generate random even integers in a specific numerical range. 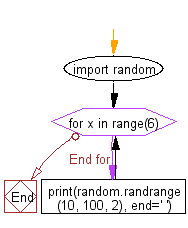