Python Math: Get a single random element from a specified string

Write a Python program to get a single random element from a specified string. 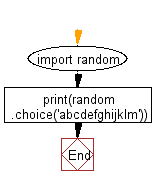