Write a Python program to shuffle the following elements randomly. 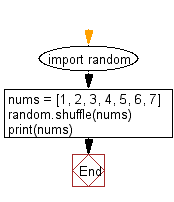