Python: Generate a list and tuple with comma-separated numbers

Write a Python program which accepts a sequence of comma-separated numbers from user and generate a list and a tuple with those numbers.

A list is a container which holds comma separated values (items or elements) between square brackets where items or elements need not all have the same type. In general, we can define a list as an object that contains multiple data items (elements). The contents of a list can be changed during program execution. The size of a list can also change during execution, as elements are added or removed from it.

A tuple is container which holds a series of comma separated values (items or elements) between parentheses such as an (x, y) co-ordinate. Tuples are like lists, except they are immutable (i.e. you cannot change its content once created) and can hold mix data types. 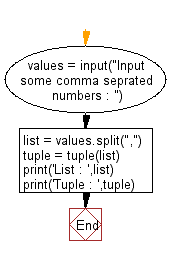