From that information it is possible to track down slow or frequently erroring resolvers, clients using deprecated fields, queries from native apps that need to be supported indefinitely, resolvers that are executing in series instead of in parallel, for example.

With one line of configuration, Apollo Server will start recording traces of every request it receives and sending summaries of that performance data to Graph Manager. Graph Manager aggregates and summarizes those traces to provide segmented, filterable insights about your graph's usage.

With the metrics reporting set up, you'll be able to see traces of your operations in Graph Manager. Execution of a GraphQL request happens layer by layer, and each field in the query calls a function in your server called a resolver. The trace view in Graph Manager allows you to look at a detailed breakdown of the execution for individual operations, with timing shown for every resolver.

Every trace stored in Graph Manager records the request's resolver timings, variables, and HTTP headers. This is particularly useful when debugging and the detailed information about the trace can be found by opening up the trace inspector: 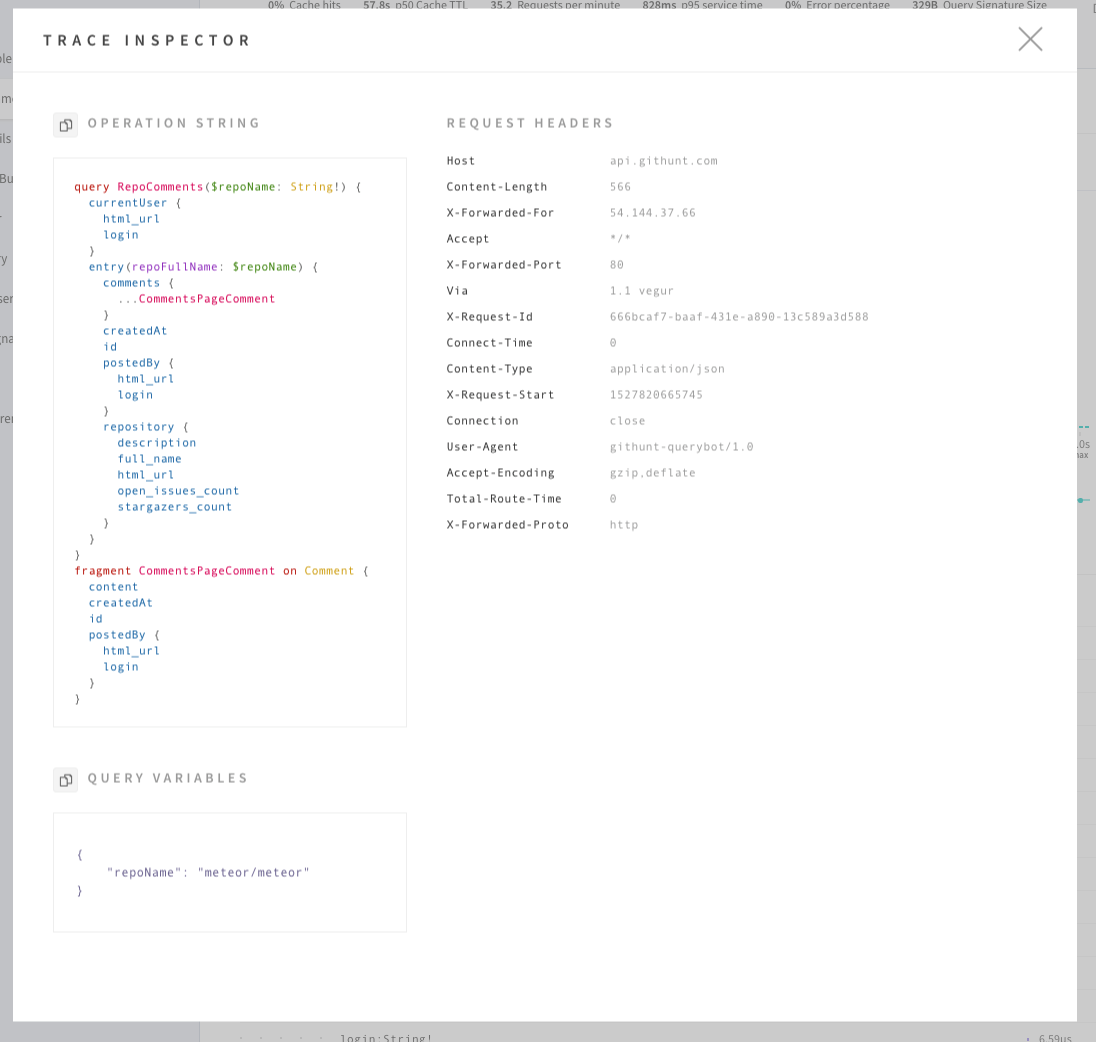 A note on GraphQL subscriptions

Graph Manager does not currently track statistics or traces for subscriptions. The proxy does, however, support the transparent pass-through of subscription requests and responses.

Graph Manager groups operations that select the same fields together, treating different queries distinctly even if they share the same name. Not every query string can be taken as-is for grouping though, because some queries inline their variables. For these cases, Graph Manager has a signature algorithm to normalize inline variables so that queries of the same shape can still be grouped together.

The signature algorithm is primarily designed to make it possible to treat operations that differ only in trivial ways as the same operation. It also happens that removing the content of string literalsappears to achieve greater data privacy within Graph Manager, but this is not the primary goal. In fact, Graph Manager also sends the full raw query along with traces (though it does not currently expose them in the user interface), so relying on the signature to ensure sensitive data never hits Graph Manager's servers is inappropriate.

But where possible, we strongly advise that you keep sensitive data in GraphQL variables instead of in literal arguments in the query body, as you can more easily control which variables should be stripped out of the Graph Manager reporting pathway for privacy purposes.

The errors tab in Graph Manager's metrics layer automatically shows errors aggregated across your service, and this can be filtered to errors for a specific operation using the filter panel. Each operation can have multiple requests that return errors and will list these. Each error listed that has one trace can have multiple errors under each resolver. Clicking into the trace for a request with errors will take you to details of that error instance.