Python Math: Calculate the Hamming distance between two given values

In information theory, the Hamming distance between two strings of equal length is the number of positions at which the corresponding symbols are different. In other words, it measures the minimum number of substitutions required to change one string into the other, or the minimum number of errors that could have transformed one string into the other. In a more general context, the Hamming distance is one of several string metrics for measuring the edit distance between two sequences. It is named after the American mathematician Richard Hamming.

Write a Python program to calculate the Hamming distance between two given values. 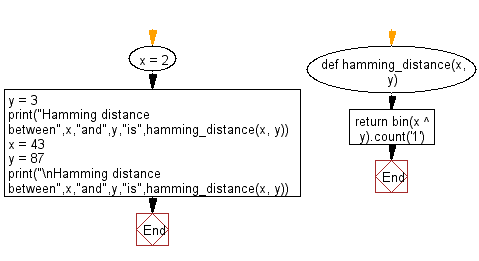 Getting rid of unwanted characters:

You can get rid of whitespaces or any specific character using strip methods in Python. You can use either plain strip for both sides, lstrip for the left side and rstrip for the right side only.