Pure JavaScript does not handle straight binary data very well, though JavaScript is Unicode friendly. When dealing with TCP streams and reading and writing to the filesystem, it is necessary to deal with purely binary streams of data.

Node has several strategies for manipulating, creating, and consuming octet ( One octet can be used to represent decimal values ranging from 0 to 255.) streams. Raw data is stored in instances of the Buffer class ( which is designed to handle raw binary data) in the node.

Note : An octet is a unit of digital information in computing and telecommunications that consist of eight bits. The term is often used when the term byte might be ambiguous, as historically there was no standard definition for the size of the byte.

A buffer is a region of a physical memory storage used to temporarily store data while it is being moved from one place to another. In node, each buffer corresponds to some raw memory allocated outside V8. A buffer acts like an array of integers, but cannot be resized. The Buffer class is global. It deals with binary data directly and can be constructed in a variety of ways.

There are several ways to create new buffers.

new Buffer(n) is used to create a new buffer of 'n' octets, where 'n' is a number

new Buffer(arr) is used to create a new buffer, using an array of octets.

In the following example roll_no contains the contents of an array. See the output.

new Buffer(str, [encoding]) is used to create a new buffer, contains a given string.

In the above log output, the buffer object contains 18 bytes of data represented in hexadecimal.

The isEncoding() method is used to test whether an encoding string is a valid encoding type or not. 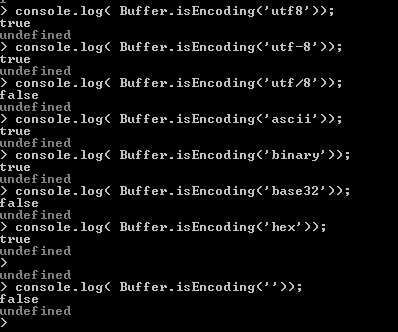 The buf.write(str, [offset], [length], [encoding]) method is used to write a string to the buffer.

Return Value : Number of octets written. If there is not enough space in the buffer to fit the entire string, it will write a part of the string.

Now write a string to it :

Here is an another example where we have added all three arguments, the second argument indicates an offset.

In the following example we have created a buffer of size 15 octets, then write a string 'Node.js'. The first toString()  method reads the entire buffer and shows some null characters ('\u0000'), since the buffer does not contain all text characters. The second one read the buffer characters from 0 to 7th position and returns 'Node.js'.

The buf.toJSON() method is used to get the JSON-representation of the Buffer instance, which is identical to the output for JSON Arrays. Here is an example : 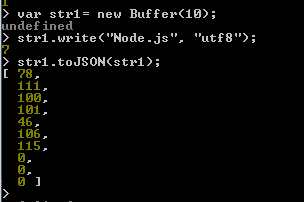 The buffer size of str1 was 10 and length of the specified string is 7, therefore, the last three values within the array shows 0.

The buf[index] is used to get and set the octet at index. The values refer to individual bytes, the legal range is between 0x00 and 0xFF hex or 0 and 255. In the following example, we have inserted three '*' characters at the end of the 'Node.js' string within the buffer. 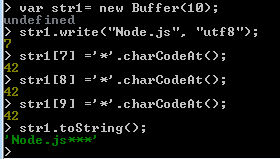 Note : See the details of charCodeAt() Method at here.

Tests if an Object is a Buffer - Buffer.isBuffer(obj):

Buffer.isBuffer(obj) method is used to check whether an object in Node.js Buffer or not.

Return Value : Return true if the object is a Buffer or false otherwise.
Value Type : Boolean.

Buffer.byteLength(string, [encoding]) method is used to get the actual byte length of a string with a given encoding.

In the following examples, actual string length of 'A' is 1 byte, whereas length of '\u00bd' is 2 bytes.

The length of buffer1 is 4 and buffer2 are 2. In the last example we have mentioned the total length of the buffers (5) therefore it shows 'Nodej' not 'Nodejs'.

The length of the buffer in bytes - buf.length 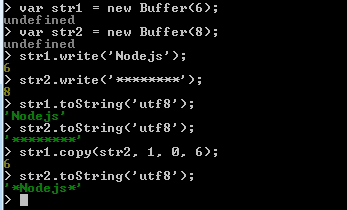 The buf.slice([start], [end]) method is used to extract a subsection of the buffer which references the same memory as the old.

Note : Negative indexes start from the end of the buffer.

Here are some examples : 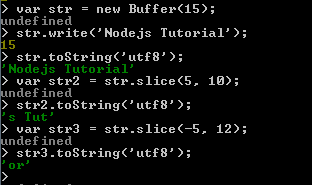