A Read-Eval-Print Loop (REPL) is a simple, interactive computer programming environment. The term 'REPL' is usually used to refer to a LISP interactive environment but can be applied to command line shells and similar environments for programming languages like Python, Ruby etc. In this tutorial, we have discussed REPL with respect to Node.js. In a REPL environment, an user can enter one and more expressions, which are then evaluated (bypassing the compile stage), and the result displayed. There are 4 components to a REPL (comes from the names of the Lisp primitive functions ) :

Node.js ships with a REPL. If you start the Node.js binary without any arguments, you will see the REPL command prompt, the > character. The node.js REPL works exactly the same as Chrome’s REPL, so from this prompt, you can type any Javascript command you wish. It is extremely useful for experimenting with node.js and debugging JavaScript code.

Whenever you type a command, it will print the return value of the command. See the following examples :

In the following codes, two variables x and y have declared with initial values 10 and 20. In both cases, REPL prints "undefined" because the variable declaration statements do not return any value. The next statement x+y returns the value 30. After execution of console.log(x+y) function, REPL prints the value of x+y and displays "undefined" again because console.log() function returns no value.

Press tab key to see the list of current commands.

In the following list character d is pressed followed by the tab and the REPL displays the list of keywords, functions, and variables starting with that particular character.

The REPL can handle multiline expression smoothly. Start to enter a command, function or another unclosed tag into the REPL, and the REPL automatically extends to multiple lines. See the following example :

Note : The ... is used by the REPL to indicate a multiline expression.

The special variable _ (underscore) contains the result of the last expression. In the following example, _ variable first display the length of the declared array i.e. 6 and again display 8 after adding 2 to it.

The .help command is used to display all the available REPL commands.

The .clear command is used to exit from a multi-line expression, similar to .break.

The .save command is used to save the current REPL session to a file. In the following example, the current session is saved to the file test.js. 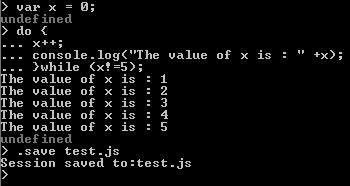 The .load command is used to load the contents of a file into the current REPL session. In the following example .load command loads previously saved file test.js. 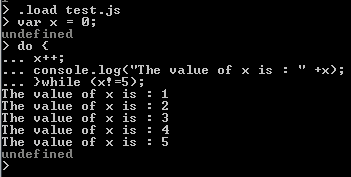