What is a Pointer?

A pointer is a variable that stores the address of a memory location. Pointers are used to store the addresses of other variables or memory items. A pointer is extremely helpful for another type of parameter passing, commonly referred to as pass by address. Pointers are essential for dynamic memory allocation. 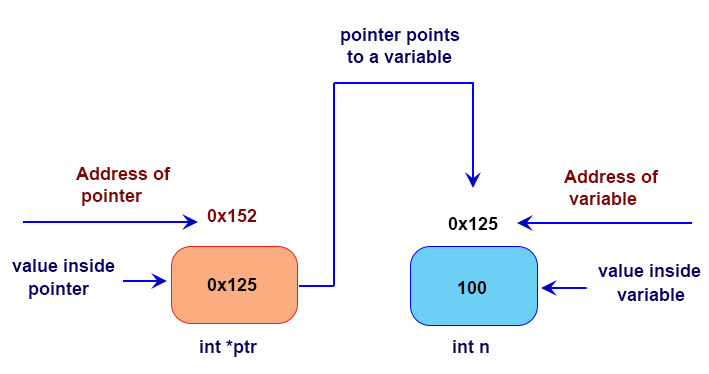 The following are some common uses for pointers:

Pointer declarations use the * operator. They follow this format:

In the example above, ptr is a pointer, and its type will be specifically be referred to as "pointer to int", because it stores the address of an integer variable. We also can say its type is: int*

The type is important. While pointers are all the same size, as they just store a memory address, we have to know what kind of thing they are pointing to.

Sometimes the notation is confusing, because different textbooks place the * differently. The three following declarations are equivalent:

Above three of these declare the variable ptr as a pointer to an int.

Another tricky aspect of notation: Recall that we can declare multiple variables on one line under the same type, like this:

Since the type of a "pointer-to-int" is (int *), we might ask, does this create three pointers?

This is not three pointers. Instead, this is one pointer and two integers. If you want to create multiple pointers on one declaration, you must repeat the * operator each time:

A variable with a pointer value allocates space to hold the pointer, but not to hold anything it points to. As with any other variable in C, a pointer-valued variable will initially contain garbage - in this case, the address of a location which may or may not contain some useful information. A pointer variable is initialized by assigning it the address of something that already exists. The & (address-of) operator is commonly used to accomplish this:

There are two ways to use pointer variables:

b) In most cases, however, you will want to work with the value stored at the location indicated. You can do this by using the * (dereference) operator:

A pointer in C is always a pointer to a particular data type:
int*, double*, char*, etc.

An integer pointer stores only the address of an integer variable.

A character pointer stores only the address of a character variable.

An integer pointer stores only the address of an integer variable.

We can print a pointer value using printf() function with the %p format specifier. Following program prints out some pointer values:

In the preceding code snippet we saw, ptr was pointing to x i.e. ptr contained the address of the location in which x is stored. The data item represented by x can be accessed by using the unary operator *, which is also termed as the indirection operator can be used only on pointers. Consider the following example:

There is a special pointer called null pointer whose value is 0. You can assign 0 into a pointer:

Null pointers are never valid targets, however a segmentation fault will occur if you attempt to dereference the null pointer. In most cases, a null pointer is used to initialize pointers until their values are known before they are used.

Pointers of the same type:

A pointer can also be assigned to another pointer of the same type:

Previous: Arrays in C
Next: C Pointers and Functions