The C language makes extensive use of pointers, as we have seen. They can be used to provide indirect references to primitive types, to create dynamically sized arrays, to create instances of structs on demand, and to manipulate string data, among other things. Pointers can also be used to create references to functions. In other words, a function pointer is a variable that contains the address of a function.

Why use function pointers?

Unlike a function declaration, a function pointer declaration wraps the function name in parentheses and precedes it with an asterisk. Here is an example:

By passing a pointer into a function, the function may read or change memory outside of its activation record.

In the following example, function passes the value of p and the address of q, which are used to initialize the variables x and ptry in the function test.

In the said code ‘p’ remains at 10 as there is no return value form the function test, but q change its value from 20 to 200 in the function test() as bptr holds the address of a variable q that is stored in main function. So when we change the value of *bptr it will automatically reflecte in the main function. 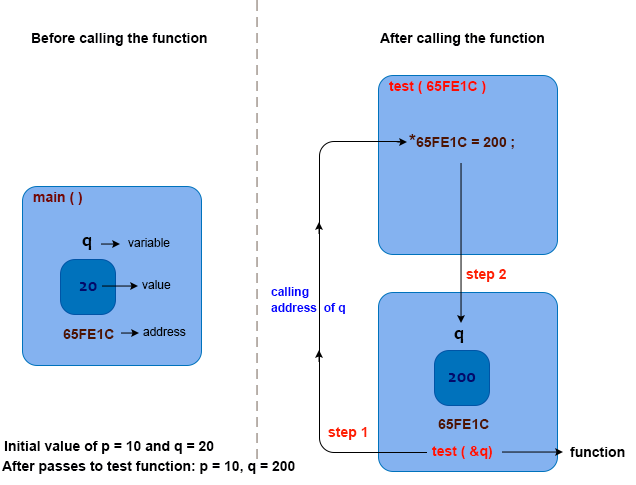 Example of Returning a Pointer: