This guide offers tips and techniques for unit and integration testing Angular applications.

The Angular CLI downloads and install everything you need to test an Angular application with the Jasmine test framework.

Any project created with the CLI is immediately ready to test. Just run the ng test CLI command:

The last line of the log is the most important. It shows that Karma ran three tests that all passed.

A chrome browser also opens and displays the test output in the "Jasmine HTML Reporter" as shown in the below code snippet. 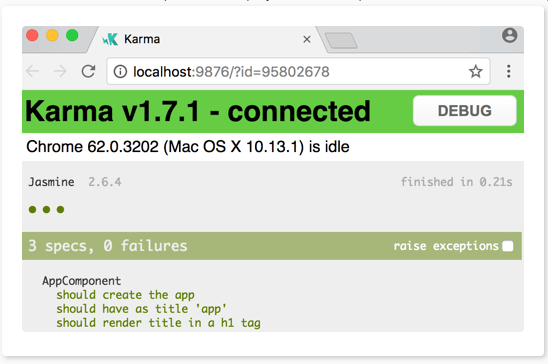 The CLI takes care of Jasmine and Karma configuration for us. We can fine-tune many options by editing the karma.conf.js and the test.ts files in the src/ folder.

You can also unit test an Angular app with other testing libraries and test runners. Each library and runner have its own distinctive installation procedures, configuration, and syntax which will not be covered in this tutorial.

When the tests are complete, the command creates a new /coverage folder in the project. Open the index.html file to see a report with your source code and code coverage values.

If you want to create code-coverage reports every time you test, you can set the following option in the CLI configuration file, angular.json:

See the Pen mYXoyY by w3resource (@w3resource) on CodePen.

The code coverage percentages let you estimate how much of your code is tested.

If your team decides on a set minimum amount to be unit tested, you can enforce this minimum with the Angular CLI.

For example, suppose you want the code base to have a minimum of 80% code coverage. To enable this, open the Karma test platform configuration file, karma.conf.js, and add the following in the coverageIstanbulReporter: key.

See the Pen yWvwYb by w3resource (@w3resource) on CodePen.


The thresholds property causes the tool to enforce a minimum of 80% code coverage when the unit tests are run in the project.

Services are often the easiest files to unit test. Here are some synchronous and asynchronous unit tests of the ValueService written without assistance from Angular testing utilities.

See the Pen zQRbKW by w3resource (@w3resource) on CodePen.

Services often depend on other services that Angular injects into the constructor. In many cases, it's easy to create and inject these dependencies by hand while calling the service's constructor.

The MasterService is a simple example as illustrated in the code snippet:

See the Pen byLZge by w3resource (@w3resource) on CodePen.

A component, unlike all other parts of an Angular application, combines an HTML template and a TypeScript class. The component truly is the template and the class working together. and to adequately test a component, you should test that they work together as intended.

The Angular TestBed facilitates this kind of testing as you'll see in the sections below. But in many cases, testing the component class alone, without DOM involvement, can validate much of the component's behavior in an easier, more obvious way.

Test a component class on its own as you would test a service class. Consider this LightswitchComponent in the code snippet below which toggles a light on and off (represented by an on-screen message) when the user clicks the button.

See the Pen ZNrPMo by w3resource (@w3resource) on CodePen.


You might decide only to test that the clicked() method toggles the light's on/off state and sets the message appropriately.

See the Pen mYXoQV by w3resource (@w3resource) on CodePen.

Testing the component class is as easy as testing a service. But a component is more than just its class. A component interacts with the DOM and with other components. The class-only tests can tell you about class behavior. They cannot tell you if the component is going to render properly, respond to user input and gestures, or integrate with its parent and child components.

None of the class-only tests above can answer key questions about how the components actually behave on screen.

These may not be troubling questions for the simple components illustrated above. But many components have complex interactions with the DOM elements described in their templates, causing HTML to appear and disappear as the component state changes.

To answer these kinds of questions, you have to create the DOM elements associated with the components, you must examine the DOM to confirm that component state displays properly at the appropriate times, and you must simulate user interaction with the screen to determine whether those interactions cause the component to behave as expected.